Manufacturing and Laboratory Facilities in the United States

Ask A Question Request a Quote   Certificate of Compliance 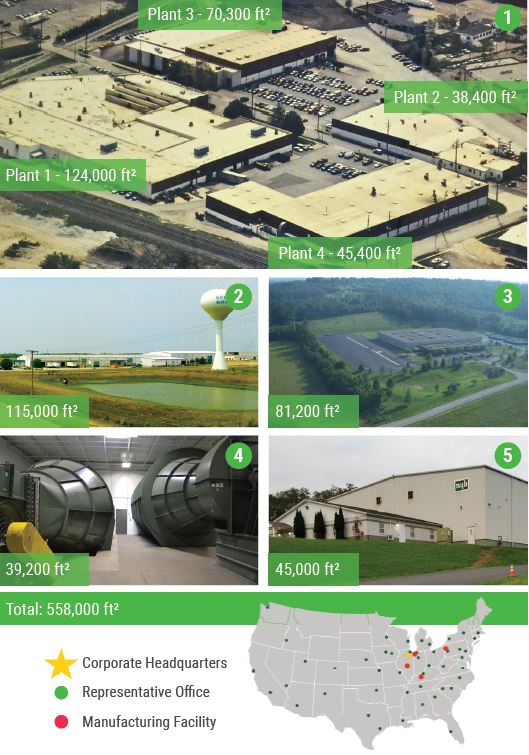 The New York Blower Company has been expanding our operations in the 130+ years we've been building industrial fans.

Manufacturing and Testing Facilities include:

1: La Porte, IN - Contains Four Manufacturing Plants. The plants have been expanded on over nine times since 1918.
2: Effingham, IL - in 2001 nyb decided to expand outside of La Porte, IN and purchsed a facility in Effingham.
3: Leitchfield, KY - Another facility is purchased to better serve customers in the Southeast and to further help nyb expand their product offerings.
4: La Porte, IN - Testing Laboratory - AMCA Accredited. In 2013 we expanded and redesigned our lab to hold six airflow test chambers (4 Figure 12 and 2 Figure 15) and two reverberant sound rooms (approximately 15,000 ft3 and 44,000 ft3). Lab testing includes the ability to test fans with flows to 130,000 CFM, pressures to 100" WC, and horsepowers to 400 BHP.
5. New Castle, PA - Two Manufacturing Facilities. In 2017 nyb started building a new facility in New Castle, Pennsylvania.  The 30,000 square-foot building is in addition to the existing 15,000 square-foot building right down the road. The new facility started production in October, 2018 focusing on designing and building custom fans for industries such as petrochemical, nuclear, locomotive, gas turbine cooling modules, and refractories. Some capabilities include a 40 ton hoist, 30" hook crane heights, 1,000 HP test block, and adherence to ISO 9001.